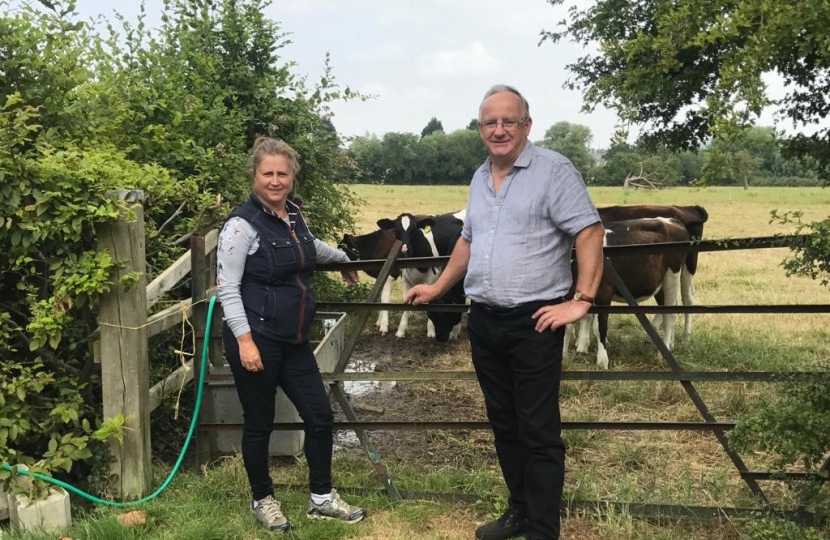 Thank you to those who have taken the time to contact me regarding the Agriculture Bill. I should like to assure you that I strongly value the UK’s agricultural sector and our high domestic standards, particularly with regard to food standards.

Last night MPs voted to approve the latest stage of the Agriculture Bill which will put in place a new system of support for farmers in England, that protects the environment, maintains our high standards and ensures food is produced in a more sustainable way.

Our landmark Agriculture Bill will transform British farming, enabling a balance between food production and the environment which will safeguard our countryside and farming communities for the future. This is one of the most important environmental reforms for many years, rewarding farmers for the work they do to safeguard our environment and helping us meet crucial goals on climate change and protecting nature and biodiversity.

The UK will move away from the EU’s bureaucratic Common Agricultural Policy and towards a fairer system which rewards our hard-working farmers for delivering public goods, celebrating their world-leading environmental work and innovative, modern approach to food production.

The UK is a high quality and competitive producer and exporter of agricultural and agri-food products and Government analysis shows that the UK’s new trade agreements, including with the US, will bring significant new opportunities for the UK farming sector.

Despite scaremongering from the Labour Party (and please see below), our manifesto was clear that we will not compromise on our high environmental protection, animal welfare or food standards in future trade negotiations. The UK Government is committed to not compromising on domestic standards. No UK import or food safety standards will be diminished as part of an FTA. We will also not undermine our high domestic environmental protection, animal welfare and food safety standards.

In fact, it is worth noting that I brought this exact issue to the attention to the Labour government in 2009. I asked:

To which the then Labour Secretary of State for Environment, Food and Rural Affairs, Hilary Benn responded:

“I think the House should welcome the fact that we have such high animal welfare standards. I know that the hon. Gentleman takes that view. We have, for example, the freedom food assurance scheme—sponsored by the Royal Society for the Prevention of Cruelty to Animals—which goes beyond the legal requirements, and we have seen a rising demand for free-range eggs in recent years.

The World Trade Organisation’s rules do not allow for discrimination on the basis of the system of production. I think that the answer to the hon. Gentleman’s very important question is that we should ensure that the public have more information about the way in which the food is produced, so that they can support higher welfare standards through their choice of what to buy.”

Sadly, though not surprisingly, in spite of having said the above, the Labour Party and Hilary Benn voted the opposite way on these issues! However, I am not able to support the approach of the Lords amendment, as it would prevent the Government from being able to secure fair and reciprocally beneficial trade deals.

Currently, we import food from countries such as Canada, Japan and South Africa under preference in existing free trade agreements, and none of these agreements include a requirement that these countries follow domestic UK production standards. Trying to force all trading partners to produce to UK domestic standards will only result in fewer export opportunities for the farming sector and cut it off from world markets and we are explicitly arguing against this concept in the EU negotiations.

New trade barriers, like those proposed in the amendment, could also be particularly challenging for, or cause a negative impact on, developing countries and Commonwealth partners as they would be least able to align with or exceed UK standards.

Nonetheless, I will continue to support and promote Government’s ongoing activities in these areas.  For example, the government will involve representative organisations like the NFU and the AHDB in our negotiations through the Strategic Advisory Group and our sector specific export trade advisory groups to ensure the view of industry are represented.

In terms of  animal welfare, UK officials continue to engage with foreign officials in preparation for the launch of negotiations and to help build a shared understanding of our countries’ approaches and ambitions for a future trade relationship. Discussions have focused on building knowledge of our respective current domestic standards in these areas and understanding how our Partner Countries have treated them in some of their existing trade agreements.

Animal welfare is an issue that I care passionately about and I will continue to push the government to improve animal welfare standards going forward. I recently led a Westminster Hall debate on the issue of non-stun slaughter where I welcomed the news that the government will be holding discussions with stakeholders so that we can move forward in ensuring we prevent unnecessary suffering of animals at slaughter. This is of great concern to me personally, but also to my constituents and the wider public.

As we build back greener from coronavirus, we will ensure our farmers have the support they need, our environment is protected for future generations and our high standards are maintained.

As well as being food producers, farmers are the custodians of our countryside and it's important that we support them. I have held many meetings with local farmers and have tried to help them with their issues and will be supporting this bill.

The National Grid recently presented their plans to take down 20 pylons and 7km of overhead electricity line to the east of Cheltenham and onto the Cotswold Plateau, replacing them with cables buried underground.