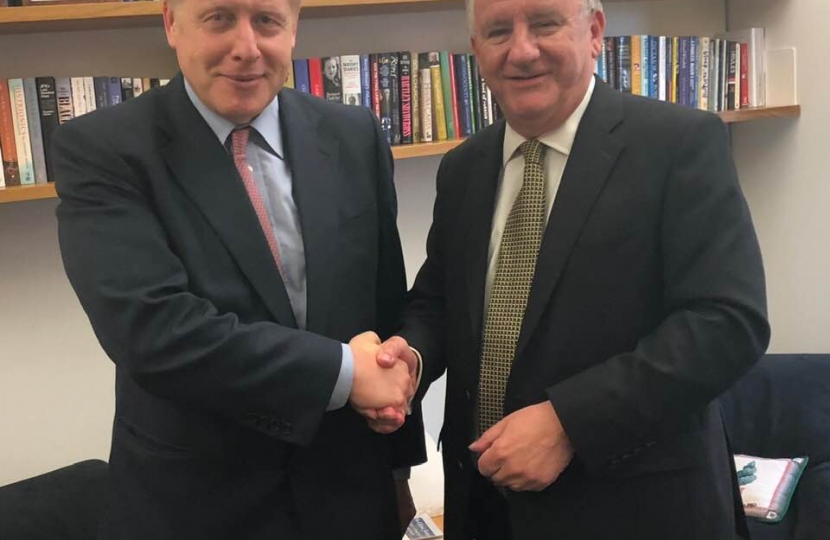 Theresa May resigned as leader of the Conservative Party on 7th June. She will remain as Prime Minister until the Party elects a new leader, a process which will end around the third week of July.

Theresa May did not have an easy task in delivering Brexit when she became Prime Minister. The European Union is not an easy body to deal with. I do, though, believe that the wrong priorities have been set and unnecessary mistakes have been made in the negotiations and it is now time for a new approach to be taken. That new approach will be taken by a new Prime Minister and, again, while it will not be easy to make progress, I am hoping that a new Prime Minister will start to bring people together and begin to restore trust in our Parliamentary democracy.

I have been canvassing ideas in my constituency since Theresa May announced her intended resignation and am grateful to everyone for letting me have their views. Of those who have responded, 69% have endorsed the candidature of Boris Johnson, with his nearest rival on just 7%. For this, as well as other reasons, I therefore decided to support Boris in his leadership bid.

Boris twice won London Mayoral elections and is the only Conservative to have won London. He was also a very good Mayor of London and the city certainly thrived under his leadership. I hope, and am confident, that he has the charisma, determination, experience and leadership skills to not only deliver Brexit, but, though good leadership, to bring people together. It will, however, be for the members of the Conservative Party across the country to decide on the next leader of the Party.

In the meantime, I wish Theresa May and her husband, Philip, all the best for the future.

The Prime Minister has set out our ‘New Deal’

The Prime Minister has set out our ‘New Deal’, an ambitious economic strategy to rebuild Britain across the UK, putting jobs, skills and infrastructure investment at the heart of our economic recovery post-coronavirus, and delivering on our manifesto pledges to level up the entire country.